Sofia: Press notes on The Rhinegold, The Valquirie and Siegfried - 5-8 July 2018 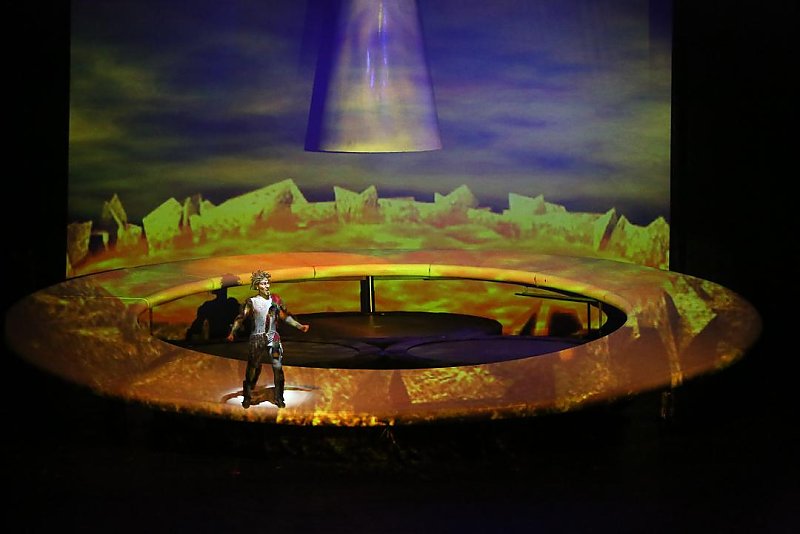 Yesterday night the “Ring of the Nibelung” started once more in the laudable production of General Director of the Sofia Opera and Ballet, Acad. Plamen Kartaloff. Even some five years after its first night, this “Vorabend”, as the first of the four music dramas was called by Richard Wagner, demonstrated an enormous freshness and vividness. It appears that the Bulgarian cast has found its way very much into what Wagner understood by doing opera by the so called “Gesamtkunstwerk”, the total work of art. This “Rhinegold” showed again the positive effects achieved by Kartaloff by conceiving his “Ring”-production on the basis of a so called story board whereby he develops the plot from the musical bar to bar. This yields very impressive effects in terms of great harmony between the action on stage and the orchstra pit under the experienced hand of Maestro Erich Waechter. Personnel directing comes first and lets characters developed at ease. 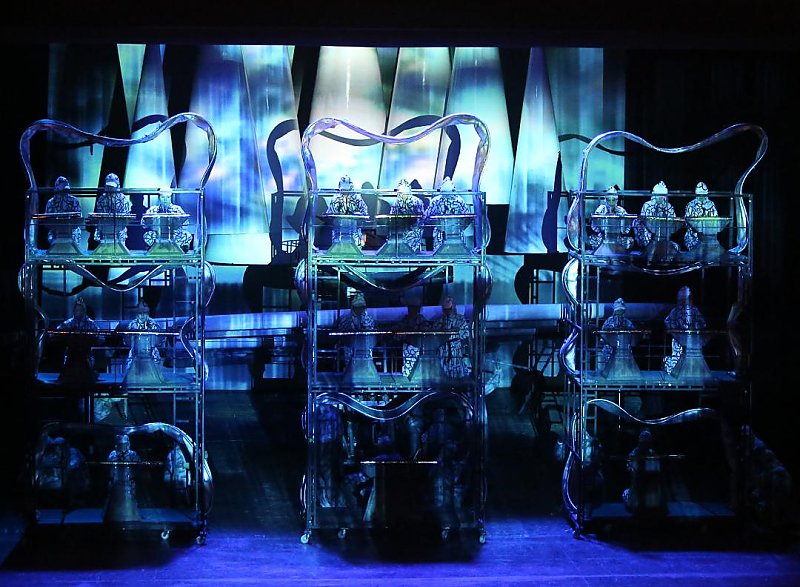 Even at the first or so round of a complete “Ring”-cycle, the international Wagner friends have not stopped from a pilgrimage to Sofia. Thus, there were significant delegations from the United Kingdom, Australia, Ireland, the USA, New Zealand Austria; Germany and Russia. Even a visitor from Hawaii was seen as well as opera lovers from Sweden and Italy. Thus, the “Ring” in Sofia is once more an international – no, better, a global event. Everybody is looking forward to “The Valkyrie” tonight. 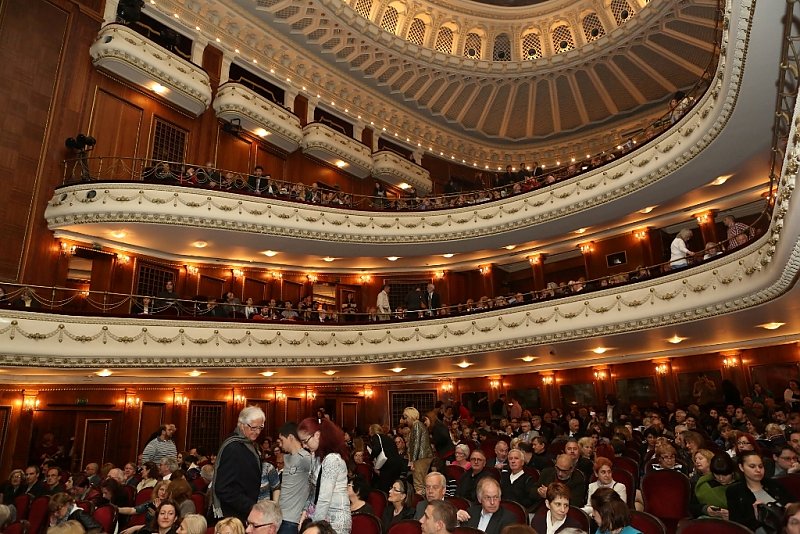 On 6 July the fabulous Kartaloff-“Ring of the Nibelung” in the true meaning of the adjective went on with a magnificent and colourful “Valkyrie” under the dynamic baton of Maestro Erich Waechter. He has brought the Orchestra of the Sofia Opera and Ballet to an impressive height of performance, some minor inaccuracies not worth counting. After a “Rhinegold” with many visual effects as well as scenic impressions and varieties, this was the evening of some very good Bulgarian Wagner singers and actors, forming a central part of the impressive stock of Wagner singers. Plamen Kartaloff has developed it over the years since 2010 with the crucial support of late Richard Trimborn as musical and language coach. 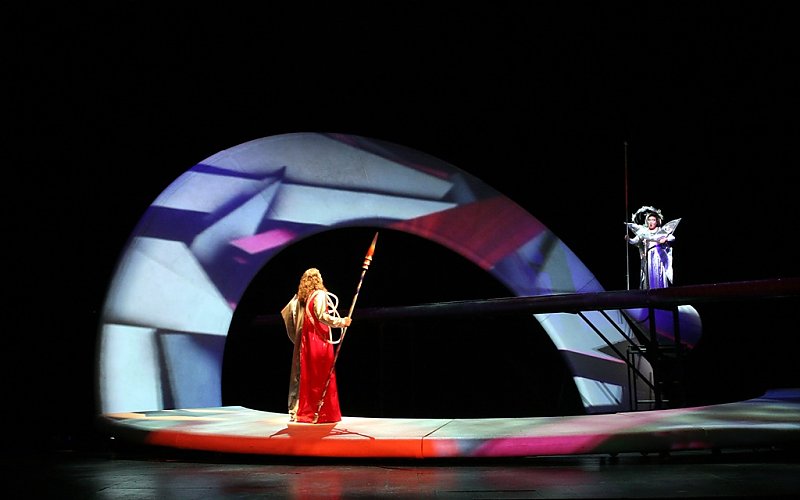 Martin Tsonev gave a striking Wotan with a real bass baritone as Wagner had in mind. Tsonev’s voice has gained deepness over the years, perhaps with the role of Wotan. He convinces as well with an excellent demonstration of the great fall of the God from the beginning of Act 2 to the end. The young Gergana Rusekova sang Brünnhilde with a warm soprano and full vocal middle position. She had only slight shortcomings in the top notes. Rusekova expressed also a warm character expressing full understanding for the demise of her father. Martin Iliev, seasoned Tristan and Siegfried of the Sofia Wagner ensemble, sang Siegmund from the beginning with a strong and baritonal coloured tenor. His melancholic timbre and somehow depressed acting made him show a tragic hero fitting well to the character. Tsvetana Bandalovska sang a maiden Sieglinde with a clear and technically well performing soprano which only could have a bit more volume at certain moments. Angel Hristov was a frightening Hunding in his strange zombielike dress. He sang with a profound bass and showed a cruel mortal fight with Siegmund going to one’s heart. Rumyana Petrova gave a demanding Fricka with no understanding for Wotan whatsoever and the related impressive mimic. Her strong mezzo-soprano lacked sound in the top notes though. 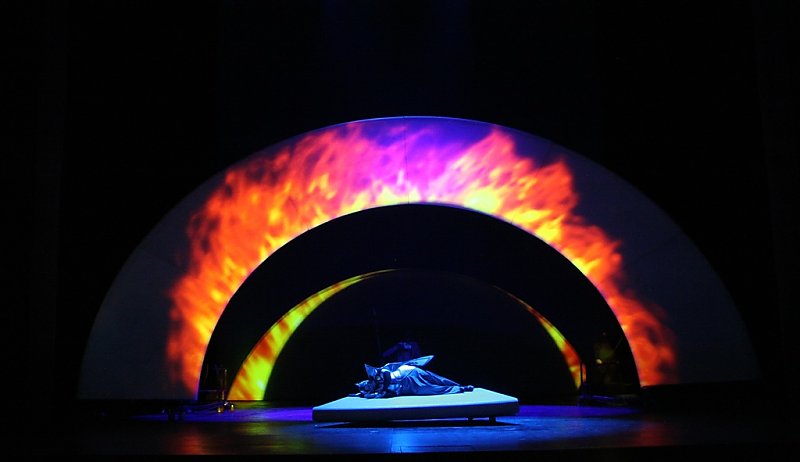 Sofia can be proud of having not only a well singing Valkyrie-Octet but also probably one of the best looking in Europe with most phantastic costumes on top, designed, as well as the sets, by Nicolay Panayotov. A number of ballet artists and acrobats enriched the play. A very striking feature is Kartaloff’s idea of having persons and events from the past passing by on a bridge when actors sing about them on the stage. Thus, even the long monologue of Wotan in Act 2 turned into vivid musical theatre! The large white Ring set was again the centre of optic attraction with the colourful and at times phantastic multimedia design of Vera Petrova and Georgi Hristov. This ring was also shown in split sections, once more reemphasizing the message of the scene at hand. Thus, the visual went again well hand in hand with the musical, emanating from Kartaloff’s story board. 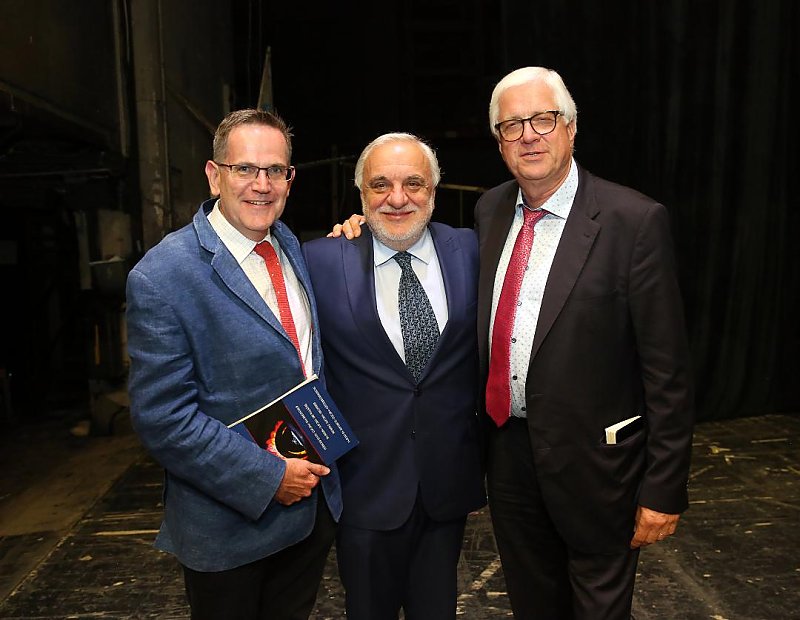 Given the enormous applause of the audience including many visitors from other European countries and overseas, it appears to me that this “Ring” will become a kind of cult-“Ring” like the one of Goetz Friedrich in Berlin in the mid 1980s which will only be replaced as of the coming season by a new production of Stefan Herheim. Thus, the Sofia production should be seen on other stages abroad, in addition to Moscow’s Bolshoi Theatre and the Festival Theatre in Fuessen, Germany, where it performed in 2015 and 2018, respectively. This “Ring” is also a perfect introduction of Wagner’s opus magnum to an audience not yet aware of this master piece, including the so much desired younger audience for the future of opera as a relevant art form. 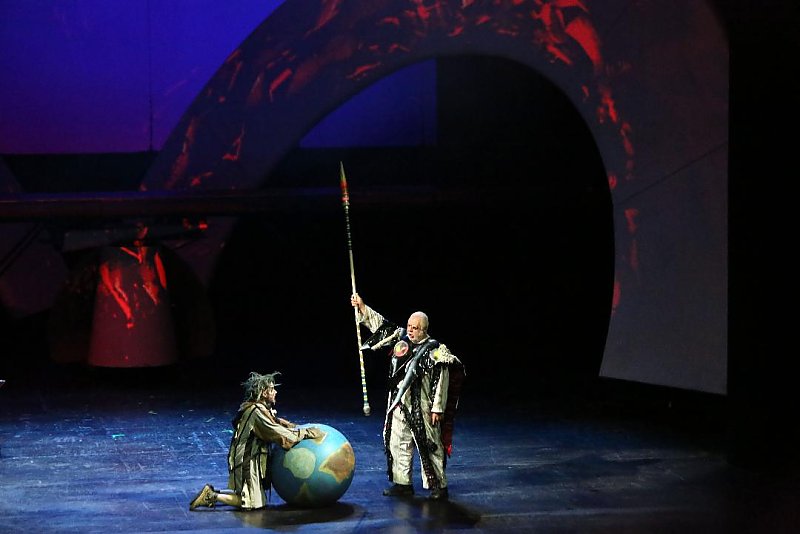 The marvelous “Ring” production directed by Plamen Kartaloff continued on 8 July with the “scherzo” of the tetralogy, “Siegfried”. And we saw a new star on the heaven of Brünnhilde for “Siegfried”, Radostina Nikolaeva. The way how this young and good looking Bulgarian lyric-dramatic soprano acted as Wotan’s daughter, departing from the God and turning to her hero Siegfried, as well as the quality of her singing throughout these thrilling thirty minutes of Act 3, was simply a revelation! Nikolaeva knows to express visibly every detail of her talk with Siegfried; her mimic is engaging and touching at times and here interaction with the vivid, authentic and extremely sympathetic young Siegfried Kostadin Andreev an example of excellence in directing actors on stage authentically. The last scene of Act 3, sometimes appearing to be boring, becomes here diverting and exciting after more than three hours of Wagner’s music theatre. Nikolaeva’s four top notes towards the end, including the final high “C”, can be called exemplary both in musical terms as well as in their length. Many great singers of Brünnhilde of our time see their limits here – and they get a multiple cache of what can be paid in Sofia! Radostina Nikolaeva appears to be a singer with an extraordinarily high musicality and will have a great future, not only as a Wagner singer. However, she should develop her wonderful material and talent slowly and carefully. Saying “no” at times is part of this. 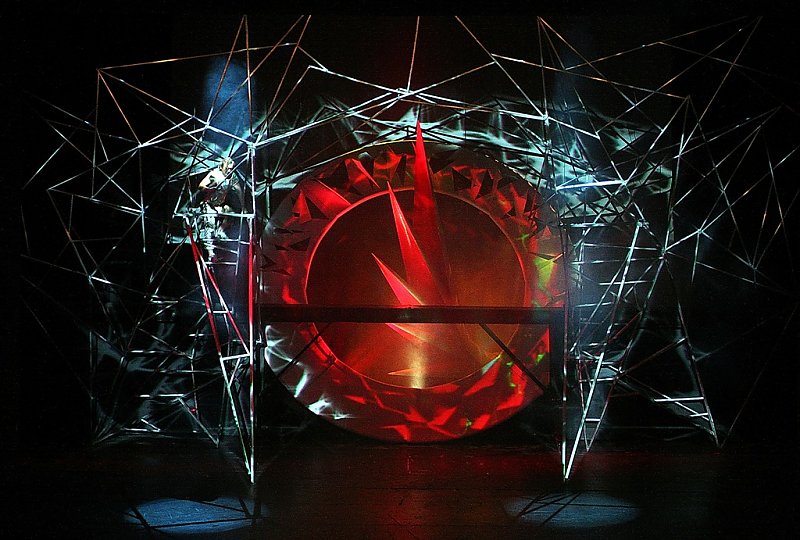 Kostadin Andreev has an enormous energy and a lot of good material for Siegfried and seems to be enjoying reaching the top notes of the role. However, he has not yet lapidated this material to really interpret the character with the diligence required. Also his German and direction need improvement. His vocal performance improved in the last scene with Brünnhilde though. Acting and looking as young Siegfried could hardly be any better. Nicolay Petrov sang the Wanderer with a great bass-baritone and a warm and fully sounding timbre. He acted with great sovereignty so that the scenes with Erda and Siegfried in Act 3 became highlights of the evening. Krasimir Dinev was a Mime with an impressive physical flexibility on stage. Vocally he sometimes faced the limits of this difficult role though. Biser Georgiev, again a very impressive and convincing Alberich as far as acting is concerned, was vocally better than in “Rhinegold” but should look to sing less gutturally. Petar Buchkov gave a Fafner with perfect German and excellent diction and was also acoustically amplified very well. One text flop appeared a bit funny as he did not express his hunger for Siegfried. Thus, the hero may have survived even without a fight… 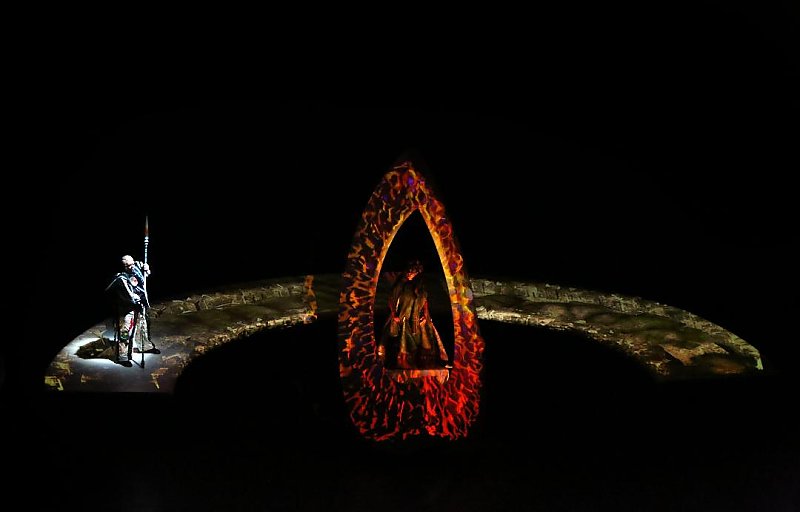 Milena Gyurova sang a charming forest bird in a very romantic set-up. Blagovesta Mekki-Tsvetkova impressed more artistically than vocally. The sets of Nikolay Panayotov in combination with the multimedia design of Vera Petrova and Georgi Hristov and the Personenregie of Plamen Kartaloff generated a magnificent romantic sphere for this story telling, emphasizing the nature aesthetics of this “scherzo” of the “Ring”. All this was embedded in the impressive and sounding musical tissue of the Orchestra of the Sofia Opera and Ballet under the baton of Maestro Erich Waechter who ought to be seen the real musical director of this “Ring” production. Particularly Act 2 and 3 impressed with their musical intensity, transparency and the necessary dynamics, inter alia, in the prelude of Act 3. Unfortunately, due to other commitments in Germany I had to leave Sofia after “Siegfried”. Thus, no note on “Twilight of the Gods”.